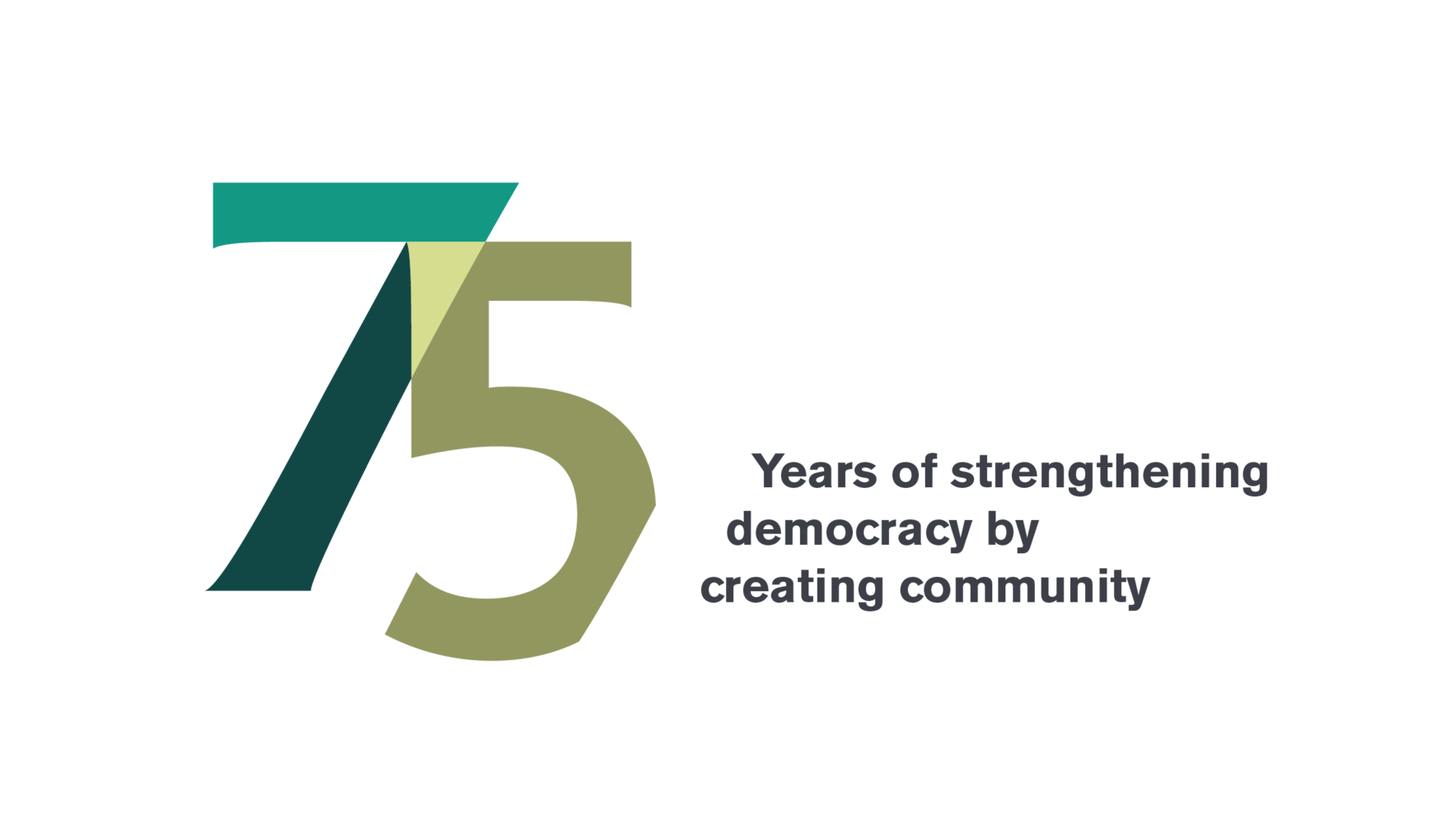 what can I do to change the course of our country?

“I know my generation has the power to change the course of our country. It would be a great privilege to work with other future leaders to do that.” — 2021 Encampment Applicant

It’s the 75th anniversary of our founding! 75 years of empowering young people in fighting for social justice. 75 years and thousands of Encampers taking their experience of community and strengthening democracy from the grassroots up. We invite you to celebrate with us and support EFC’s future.

Our applicants — the young people who want so much to be part of this movement — say it best. Their words, like those above from one of our 2021 applicants, inspire us to act. Again. Every generation, we ask ourselves what we can do to strengthen and protect democracy imperiled by inequality, racism, polarization, fascist sectors and mistrust of democratic institutions. Never has the political climate been more dire — or the need as strong to cultivate the power that young people have to change the course of our country.

75 years ago, Algernon Black, a leader in the NY Society for Ethical Culture, and Alice Pollitzer shared a vision with Eleanor Roosevelt. Responding to the rise of fascism and demagoguery in Europe that led to the horrors of the second World War, they imagined an “encampment,” not for war, but for peace. An encampment to create understanding and alliance among young people from different places, races, ethnicities and socio-economic backgrounds. A place to “initiate youth into community problems and prepare them for the responsibilities of community participation and democratic action.”

On June 30, 1946, the first Encampment was held at the Fieldston School in the Bronx. Encampers from across the nation roughed it in bunkbed dormitories, living and working with people they otherwise would never have met — and it changed their lives.

The Encampment for Citizenship remains true to that vision — strengthening democracy by creating community.

Today, the pandemic has moved the Encampment to virtual platforms. There are no bunkbeds, but there is the same community-building that an Encamper from 1946 expressed:

“One thing was central: we were trying to understand the world we inherited and the different kinds of movements that existed for social justice … We were breathing in so many ideas — it was a great, exciting time — and most important were relationships. We could learn about the struggles in different parts of the country from other Encampers and the curriculum.”— Isaac Ben Ezra, 1946 Encamper, lifelong activist for racial equality, fair housing, and workplace and healthcare reform

People like Isaac have had an enormous impact at the community and state levels over the decades. Other Encampers are strengthening democracy at a national level: people like Congresswoman Eleanor Holmes Norton; Jason Warwin, co-founder and co-director of The Brotherhood/Sister Sol; Manhattan Borough President Gale Brewer; Innocence Project co-founder Peter Neufeld; former Representative Barney Frank; former Chinese Progressive Association executive director Alex Tom; and democratic activist Miles Rapoport. And there are thousands of other alums working as teachers, lawyers, doctors, bus drivers and parents, quietly making history by bringing their EFC experiences into their everyday lives.

Building community remains the heart of the Encampment’s approach to strengthening democracy, creating compassion and encouraging activism at all levels of society.

In 2013, after a 16-year hiatus, the Encampment resumed programming. The renewal was powered by EFC alums who wanted today’s young people to experience the dynamic program that inspired their own lives of activism.

We know now, more than ever, that rebuilding democracy depends on the leadership of young people. They face many of the same enduring issues — racism, sexism, environmental destruction. They want to lead. They believe in fighting for justice. They need places and resources to engage in social justice work in their own communities. The Encampment provides:

As it has always been, the Encampment is an experience of a multicultural democratic community that builds skills and develops effective, responsible leaders.

“The most important thing I learned at the Encampment is the power of a united community for change. EFC embodies that power — if we do things together, we can do so much. In response to racial incidents at my college, I helped to spur action by organizing our floor in the dorm. It showed the power of unity in standing up for what is right. The initiative grew when another floor followed our lead. The EFC helped me identify my voice and make change in little ways.” — Ayana Henry, EFC alum 2018—19

“Both the Encampment program and working at the farm have been such unique experiences. These programs inspired me to be better for my community and they have shown me ways that I can lead and participate. Through Zoom and hands-on learning, they give me tools that I didn’t realize I needed to make an impact larger than myself.” — Lilia, 2020 Encamper and PFSP intern

Encampers continue to show the EFC’s impact: responding to bullying and racial incidents; organizing in their schools; creating social justice clubs; lobbying for safe spaces for Dreamers and farmworker health and safety; participating in Get-Out-the Vote campaigns; organizing for the Climate 805 Strike; helping to organize and facilitate a Compost Tea Party for the Pesticide-Free Soil Project; creating a website and workshops to address micro-aggressions in primarily White institutions, and more.

The question now, for all of us, is: “What’s our role making sure we have a living democracy in our future?”

One way to answer that question is by supporting the Encampment as we celebrate our first 75 years and look to the next 75. We ask you to join us in the EFC’s living experience of democracy through engaging in our community.

Please consider a donation to sponsor our 2021 Encampers — but don’t stop there. We want to ensure the EFC’s impact for the next 75 years. We need and value your support to do that! You can support the EFC at any level, starting at $10 up to joining our Legacy Circle — donors who help to ensure the EFC’s sustainability by adding us to their wills.

You can use the donation form above to donate to our 2021 Sponsorship Fund or $75,000 Sustainability Fund (or the Pesticide-Free Soil Project). Just one designation per donation — donate multiple times to split your gift!

We also invite you to join us in one or more of the following (Click here for EFC's 75th Anniversary webpage to participate.):

Imagine the impact the Encampment can have in the next 75 years. One Encamper at a time, rippling out to their families, friends, communities, cities, states, our nation and the world. Young people are asking, “What can I do to change the course of our country?” We can help answer that. It’s our opportunity to co-create with them a future that is more just and compassionate and that embodies a living democracy.